Does Your Mobile Site Use Overlays/Interstitials? Know The Issues With Google Organic Search

Google has announced that on January 10,2017, they’re launching an algorithm change to mobile search results that may result in lowered rankings for mobile pages that use overlays or interstitials.

Is Google going to penalize my mobile site for having popups?

Maybe. They’ve said that pages “may not rank as highly” in mobile search results if the content on those pages is obscured by a popup that the visitor has to dismiss.

What exactly does Google consider popups that obscure content?

Google is only looking at the page that the visitor loads when clicking from a Google mobile search result. If your mobile site is set up to only show a popup on the second page view (or later), then none of this applies.

But if any of the following happens on that first page view, the page might lose ranking:

Here’s how Google described this in their blog post:

And here are the examples Google provided of “intrusive” popups that “make content less accessible”: 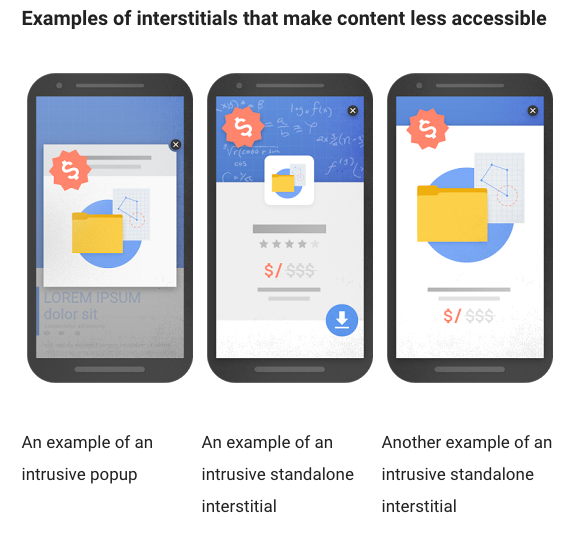 What kinds of popups has Google said are OK?

In their blog post, Google provides several examples that “used responsibly would not be affected by the new signal”:

The blog post notes that Google previously demoted pages with interstitials asking users to install a mobile app and that this change is a broadening of that to “focus on interstitials more generally”.

Here are the examples Google provided that would not be affected: 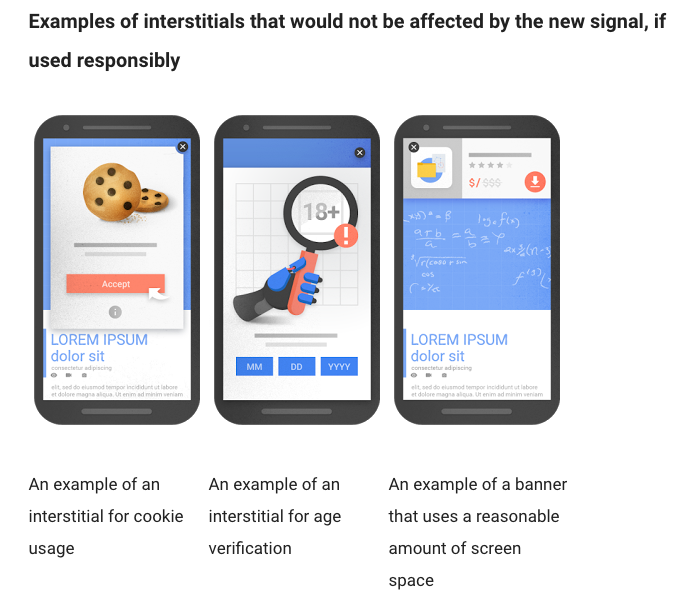 When Google launched that algorithm change, they recommended that “instead of full page interstitials”, mobile pages use “more user-friendly formats such as app install banners”. 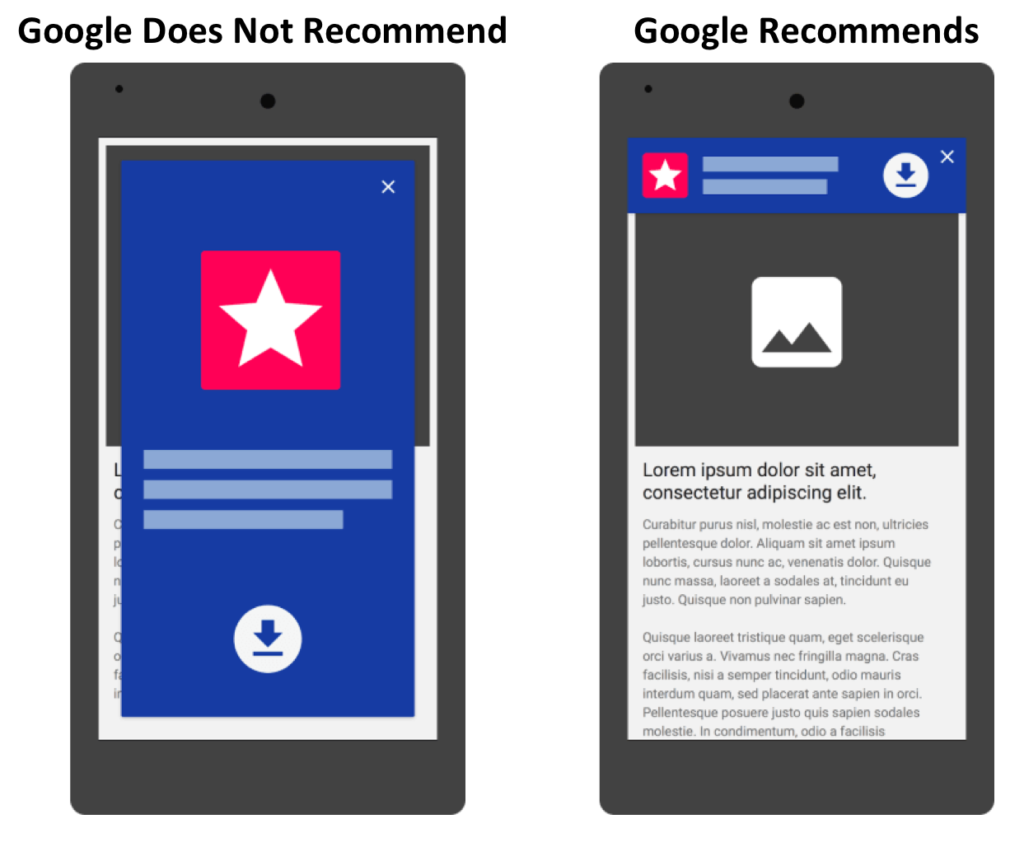 I’m not showing an ad in my popup. I’m just asking visitors for their email address or asking them to like my page on Facebook. Is that OK?

If the overlay obscures the content, it doesn’t matter what the overlay contains. Any overlay that comes between the searcher and the content on the page is at issue. John Mueller clarified that “this includes signup forms.”

Think of ways to incorporate the content of the overlay into the page itself or use a smaller banner.

Are prompts for choosing a language/country OK?

“It’s fine to have a language-picker page, but your normal pages shouldn’t have interstitials / overlays for language or country selection. There’s some more about how to set this up at https://webmasters.googleblog.com/2014/05/creating-right-homepage-for-your.html.

A language-picker doesn’t need to be an overlay. If a user is clicking on a URL in search, I’d show that content version. If you suspect the user may be on a page that doesn’t match their language/country, then showing a subtle banner i a good way of guiding them along without negatively affecting their ability to read and user the page they reached.”

So the home page of the site could show a language selection page, but that other pages should not.

If your site includes separate pages for each language/country, Google wants to rank the most relevant one for the searcher (not send the searcher to a general version that the searcher must then select from to reach the relevant version).

As the blog post he links to describes, you could include text (or a menu) or a small banner on each page that enables the visitor to change languages/countries.

Yes, Google has said this change “at the moment” is the following:

“What we’re looking for is really interstitials that show up on the interaction between the search click and going through the page and seeing the content. So that’s kind of the the place we’re looking for those interstitials. What you do afterwards like if someone clicks on stuff within your website or closes the tab or something like that then that’s kind of between you and the user.”

So exit overlays and overlays on any page after the fist one aren’t considered.

Only some of my mobile pages have overlays. Will my whole site lose ranking?

Google has said that this is a page-level calculation. So if only some mobile pages trigger an overlay, only those specific pages may lose ranking.

My mobile pages use overlays because ads are how my site makes money. I can’t just stop serving ads!

If you want to make sure that your mobile pages don’t lose ranking, you’ll need to be creative about serving ads that don’t obscure content when searchers click to the site from mobile search results.

Great. I can just move the ad in the overlay to the content itself?

You can, but you will probably need to make the ad smaller and put it below the fold. Google’s “page layout” algorithm may lower the ranking of pages with too many ads above the fold. Basically, this algorithm targets pages that require the visitor to scroll past the ads to get to the content.

Google said when they launched the page layout algorithm:

“Sites that don’t have much content “above-the-fold” can be affected by this change. If you click on a website and the part of the website you see first either doesn’t have a lot of visible content above-the-fold or dedicates a large fraction of the site’s initial screen real estate to ads, that’s not a very good user experience.”

Google hasn’t addressed them directly and you could interpret what they have said in one of two completely opposite ways. Hopefully they will clarify, but in the meantime, my guess is that this change will only impact popups or pages that show only interstitial-type content above the fold (take 1 below). But if you want to take a conservative approach, you might avoid interscroller ads for now (take 2 below).

Does this change impact desktop search?

However, Google has announced that they are moving towards “mobile first” indexing. Currently, when Google indexes a page, it aggregates indexing and ranking signals for that page based on the desktop version. The mobile version “inherits” those signals, then gets additional mobile-only signals.

With mobile-first indexing, indexing and ranking signals will be based on the mobile version of a page and the desktop version will inherit those instead. While Google is still working on the specifics of how this will all work (they plan to launch this change sometime in 2017), mobile signals will gain importance once they form the basis for both mobile and desktop results.

Can you point me to some examples of what types of overlays might cause my mobile pages to lose ranking with this change?

The examples below are based on my interpretation of Google’s announcement. I don’t have any particular knowledge about these sites. I just did a few mobile searches and clicked on the results.

Interstitial that requires waiting then clicking to get to the content: 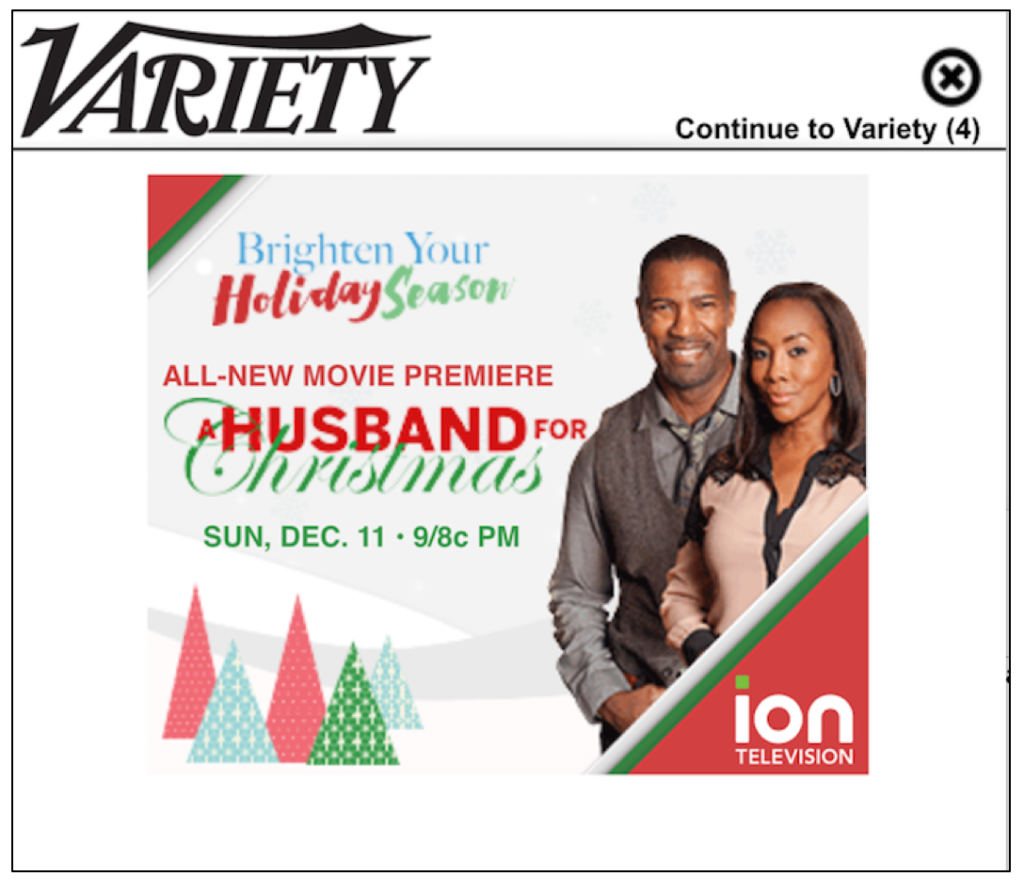 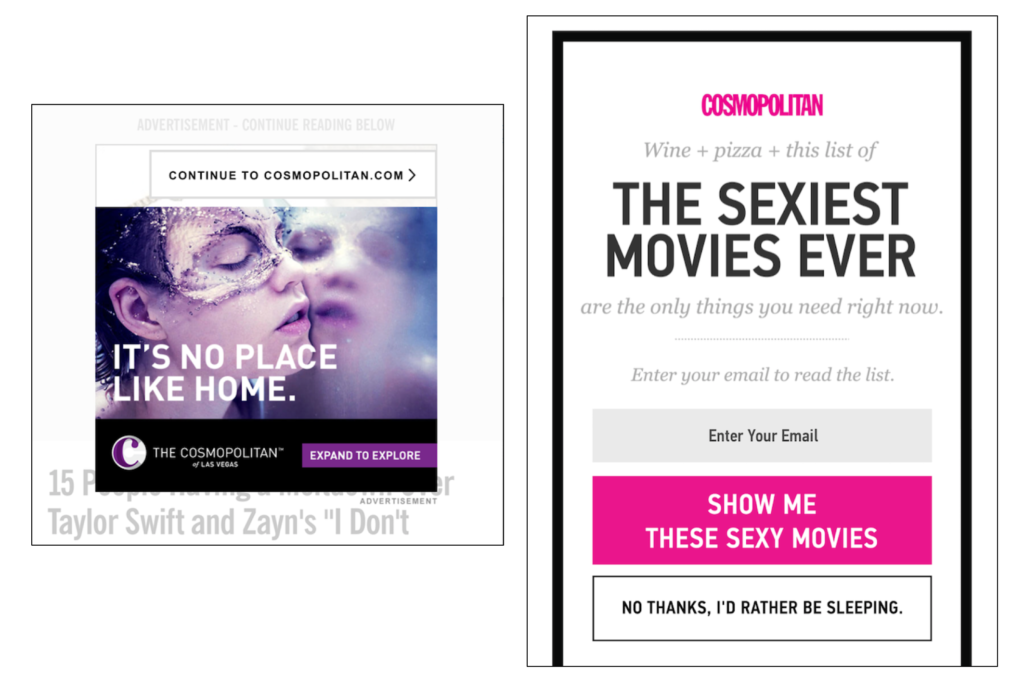 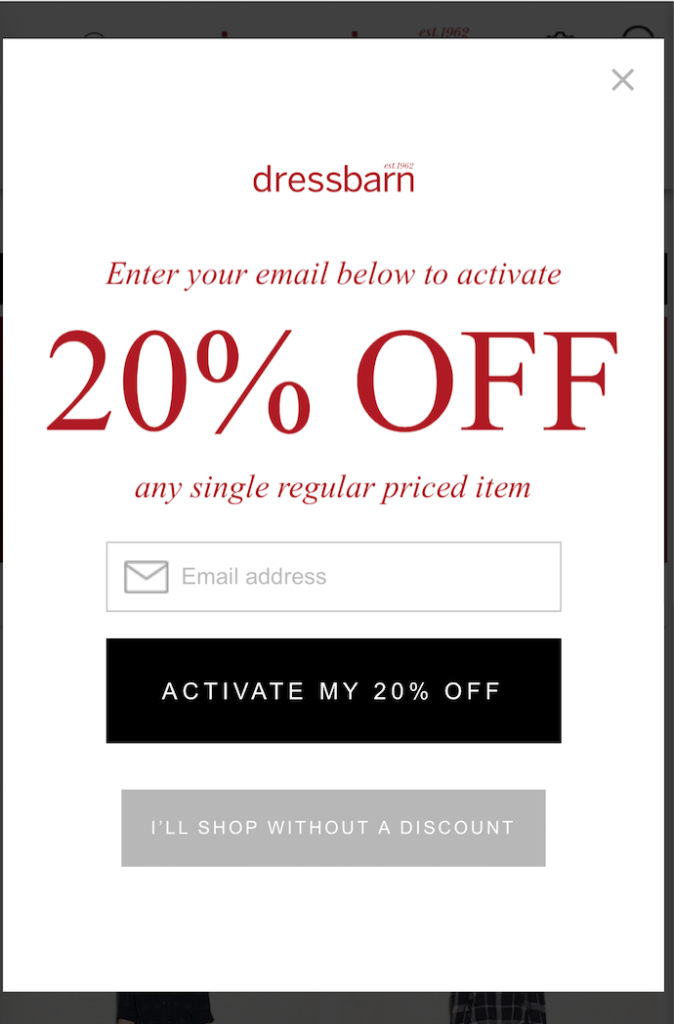 Ad you have to watch before you can see the content: 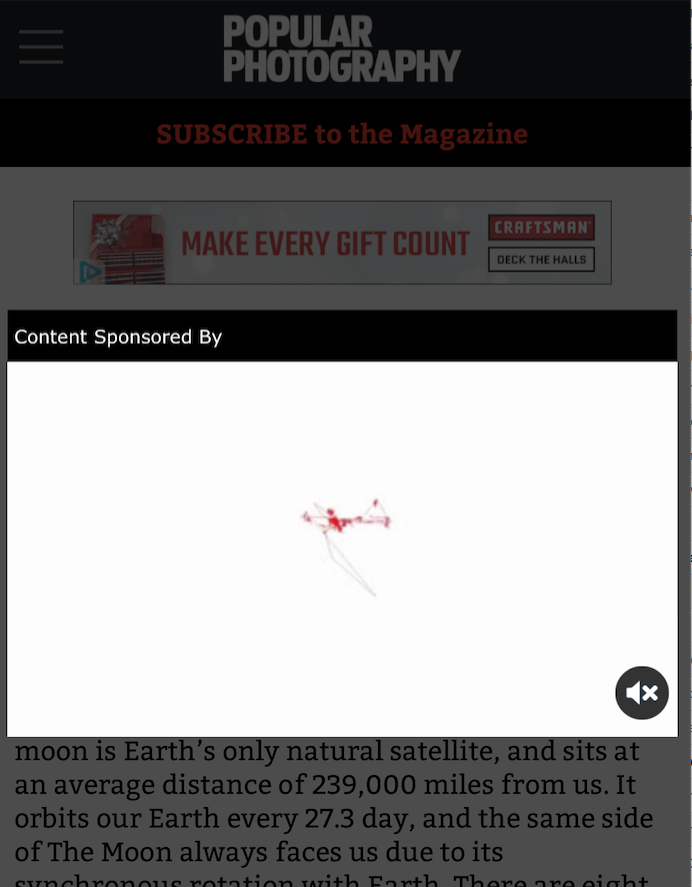 How about some mobile pages that incorporate ads or email signups that won’t be negatively impacted by this change?

Again, I don’t have any particular knowledge about these sites. I looked for pages with ads/banners that use a “reasonable amount of screen space”.

Here’s a dismissible banner that doesn’t obscure the content (and that has a compelling call to action vs. just a request for an email address). 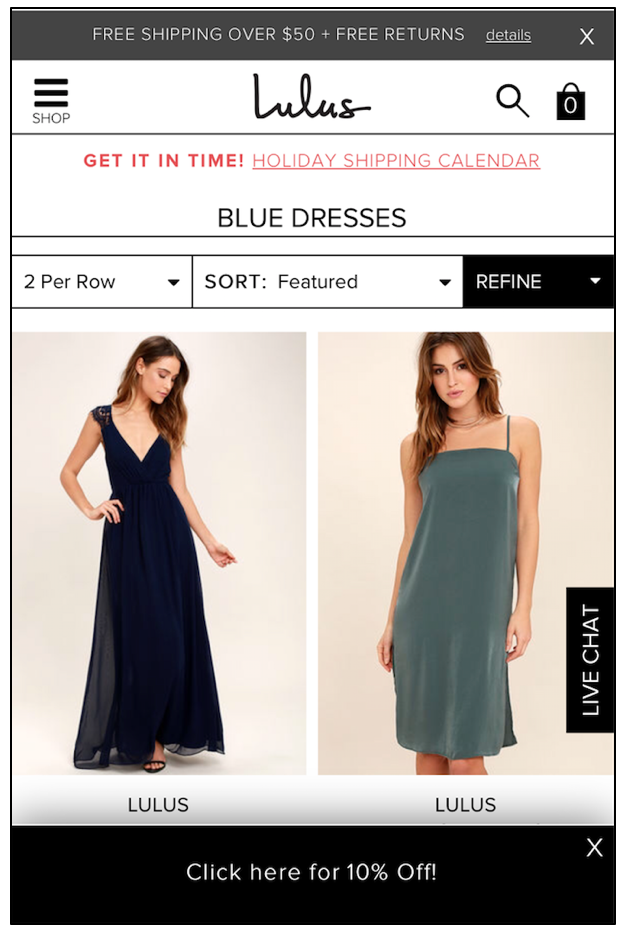 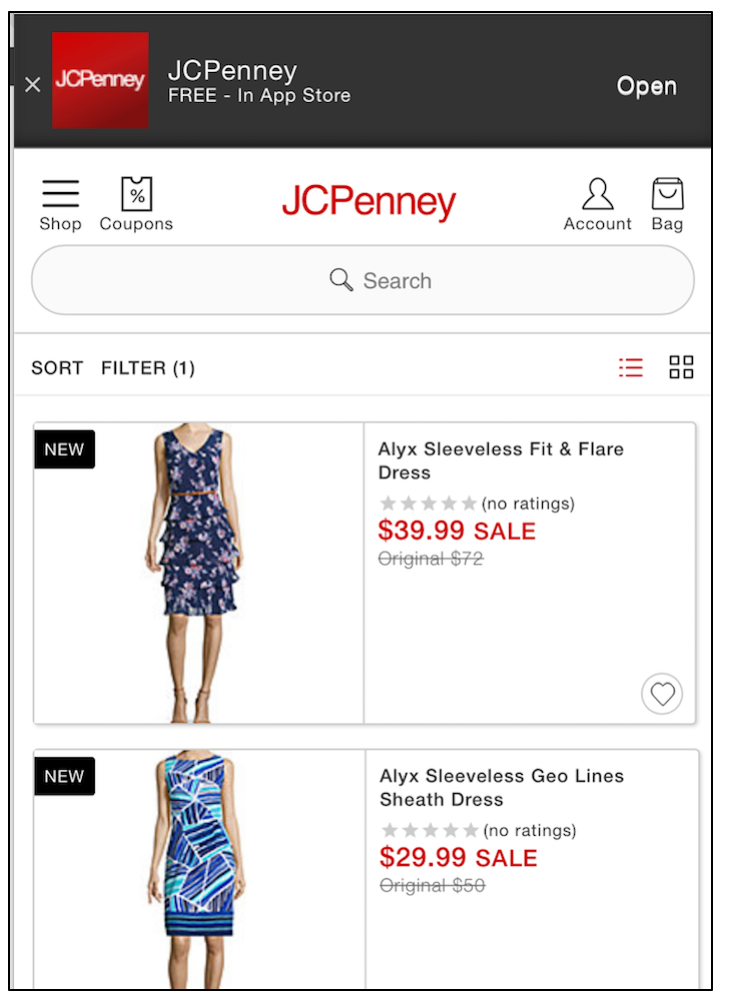 An examples of an ad above the fold: 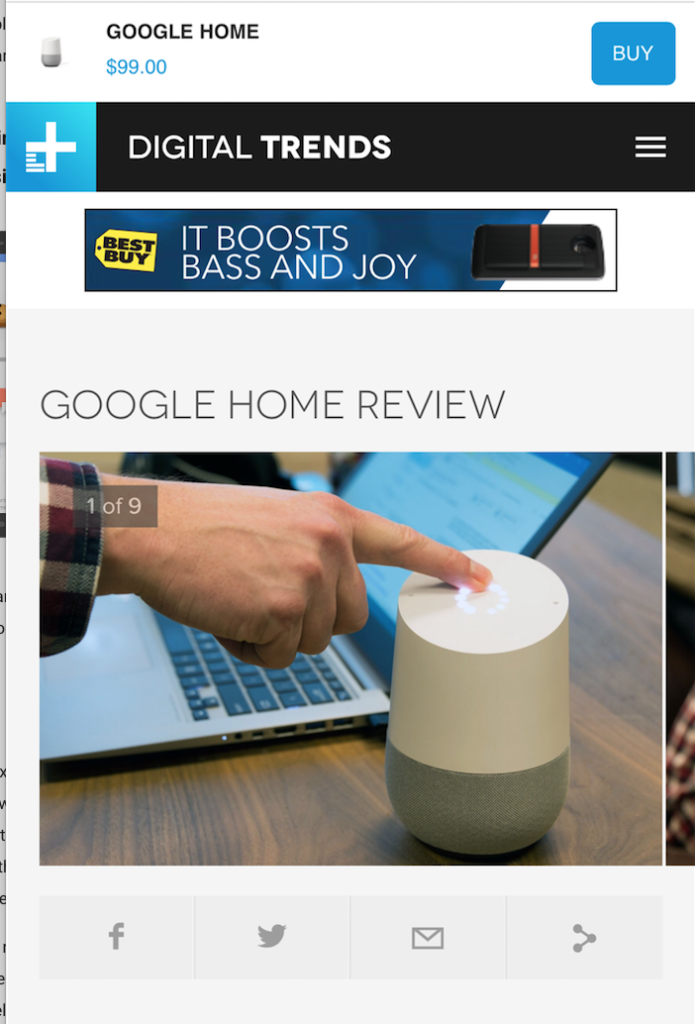 Have other questions about mobile interstitials? Post them in the comments!

Want to monitor how this change impacts your site? Sign up for Keylime Toolbox to track changes in mobile vs. desktop ranking for Google organic search by keyword and keyword categories. Send any questions about how Keylime Toolbox gathers metrics and tracks changes to hello@keylimetoolbox.com.