The Importance of Redirects and Technical Review When Launching a Site: Why Doesn’t Joe Biden’s Campaign Site Rank in Google?

CNBC published a story yesterday about how Joe Biden’s presidential campaign web site doesn’t rank in Google for queries like [joe biden] and [joe biden web site]. As a search nerd, I can’t help investigating when I read a story like that and sure enough, not only does the site not rank for those terms, it doesn’t rank for a search of the title tag of the home page ([joe biden for president 2020: official campaign website]) as of today (5/4/19). What’s up with that? 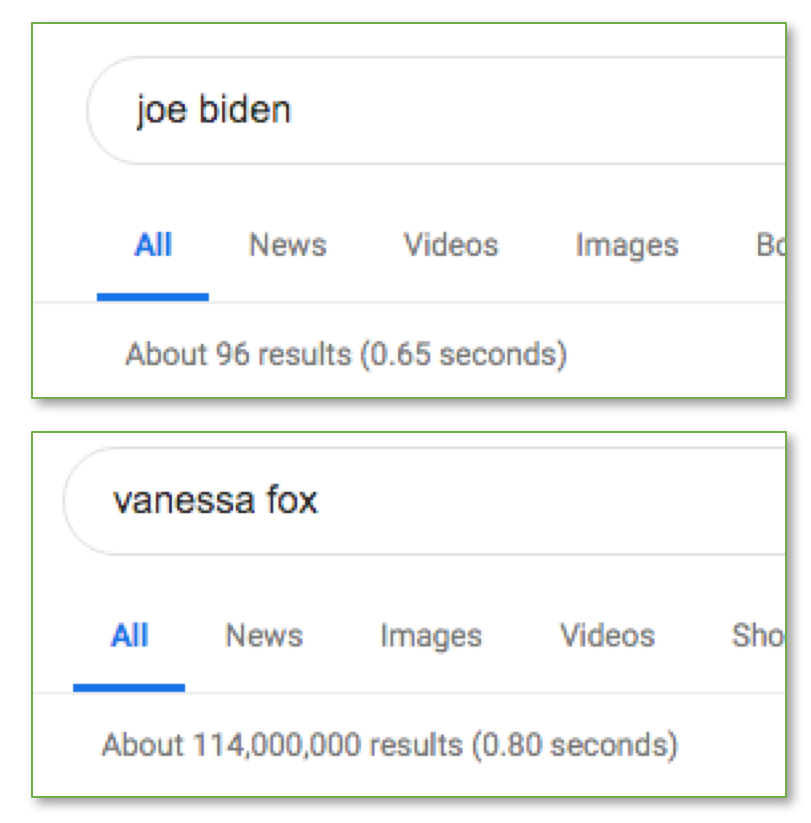 And it’s not just that query — any query related to [joe biden] results in a similar small list. 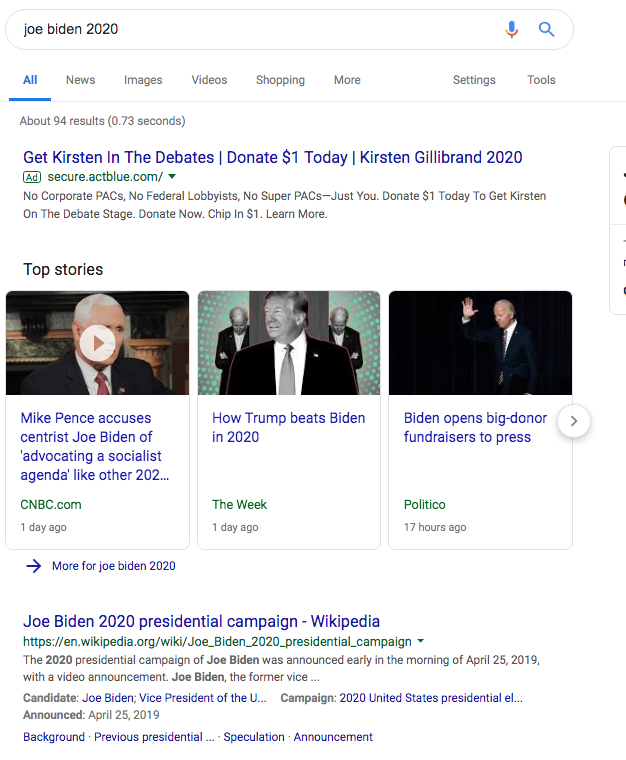 I’m not seeing the same issue for all presidential candidates, but I’m definitely seeing it for some. 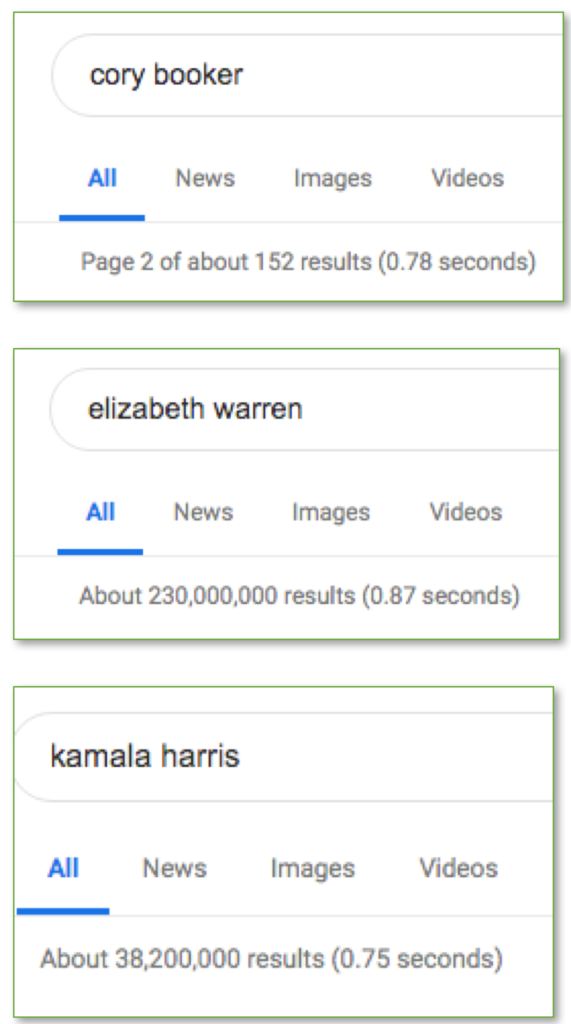 That [joe biden] search with 96 results also has a duplicate content notice:

Clicking that changes the results total from 96 to 76 million. That’s a lot of potentially duplicate content. I’m pretty sure that’s not right either.

Especially since some of the pages that then do show up are in fact scraped duplicates: 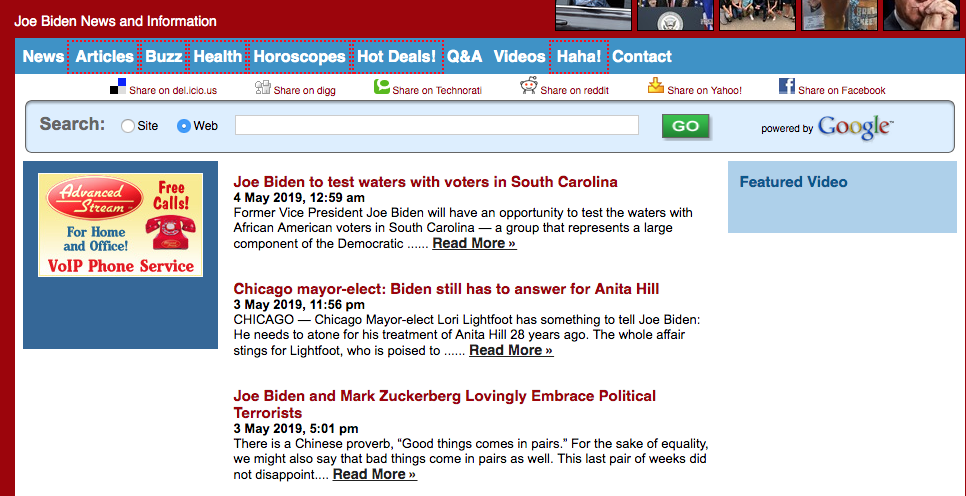 And yet, joebiden.com still doesn’t appear anywhere in the top 1k.

If I managed the SEO for the joebiden.com web site, I’d probably post in the Google Webmaster Community forum and ask if something weird is going on with those queries.

But also (as a search nerd), I did a little digging. Until Joe Biden announced he was running for president (April 25, 2019), the joebiden.com web site didn’t exist. Instead, his web site was for his PAC: American Possibilities, with the domain americanpossibilities.org.

So first, the CNBC article notes this issue was first posted by Jonathan Wlaczak on Twitter on April 25, 2019. But it’s not necessarily uncommon for a site not to be indexed and ranking in Google the first day it launches (unless you specifically plan for that, which doesn’t seem to have happened here – see more on that below).

OK, so maybe it’s not unexpected that joebiden.com wouldn’t be ranking on the day it launched, but it’s still not ranking more than a week later. What else might be going on?

According to the Wayback Machine, joebiden.com 301 redirected to americanpossibilities.org from its initial launch in June 2017. 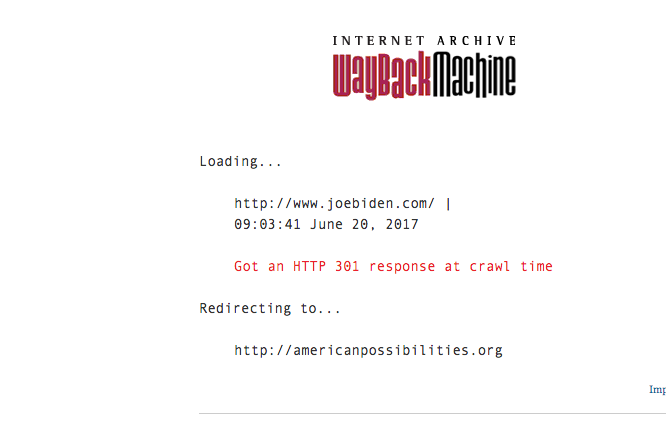 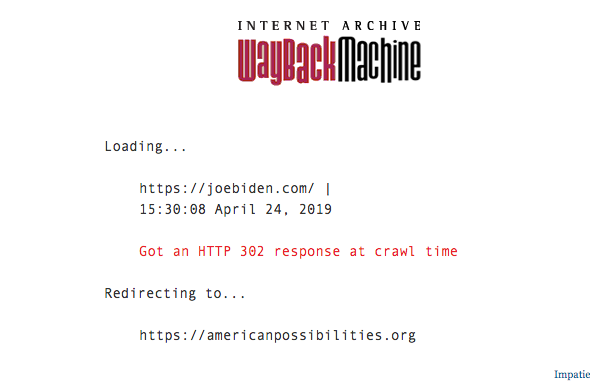 Then on April 25, 2019, announcement day, the redirect was removed and joebiden.com resolved with content and a 200 status code.

The 301 to 302 change is interesting because it might indicate those managing the site were thinking about SEO. Google transfers value signals such as PageRank with both a 301 and 302, but since a 302 redirect is temporary, generally indexes the redirecting URL (with the content of the redirect target). So the idea might have been to get the site indexed in advance of the site launch. (I’m actually not sure if this strategy would work, as I’ve only seen a URL remain indexed when the status code changed from 200 to 302. I don’t know if a URL would become indexed with a status code change from 301 to 302.)

But in any case, relevance, value, audience engagement, and external links accrued for americanpossibilities.org for 2 years, but when that site was replaced with joebiden.com, the original site was not redirected. Instead, most pages now return a 404. Some pages still exist and link to the new domain. 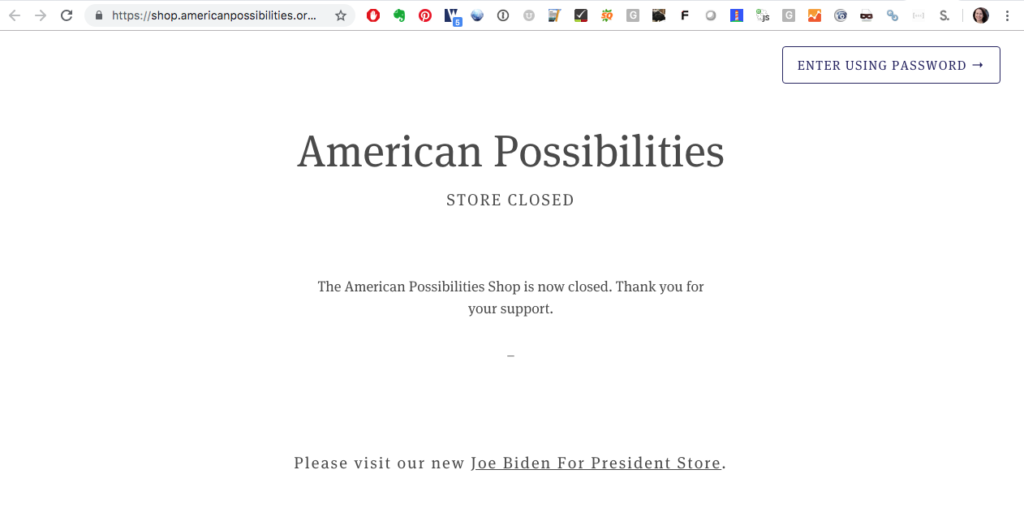 The pages that return a 404 are still indexed as of this morning: 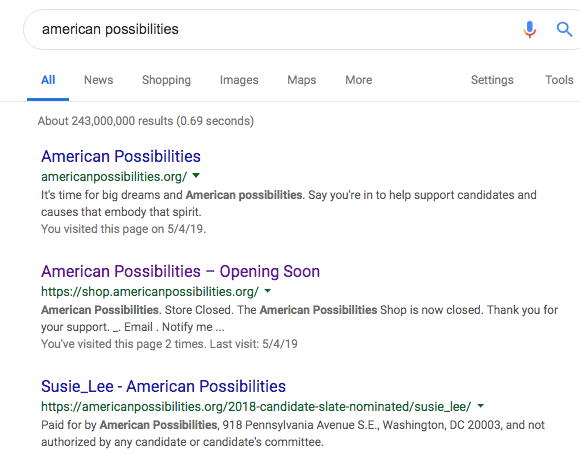 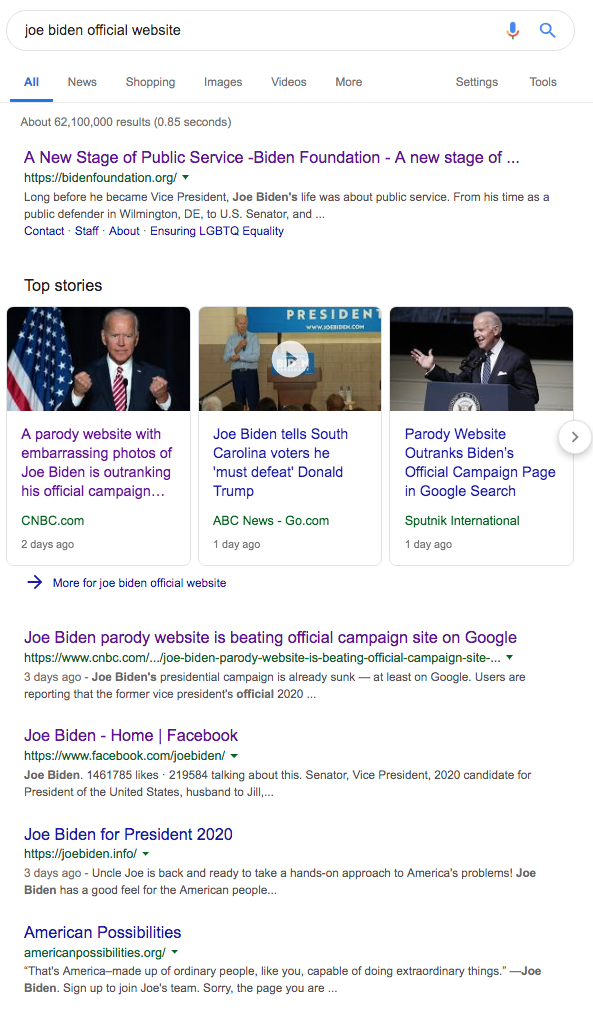 Both of those domains have substantial value signals that could be used to jump start the new joebiden.com site (and neither are now active — in addition to americanpossibilities.org returning a 404, bidenfoundation.org notes that operations have been suspended, but doesn’t link (as far as I could tell) to joebiden.com).

Ideally, americanpossibilities.org (and maybe some portions of bidenfoundation.com) should 301 redirect to joebiden.com or at least link there, to transfer the value signals, since otherwise, joebiden.com starts over in Google as a new site and ranking will take time. Maybe campaign laws exist that prevent redirects from a PAC to a presidential campaign site, but maybe the redirects were just overlooked. I see that other technical SEO issues existed on the americanpossiblities.org site when it was live. For example: 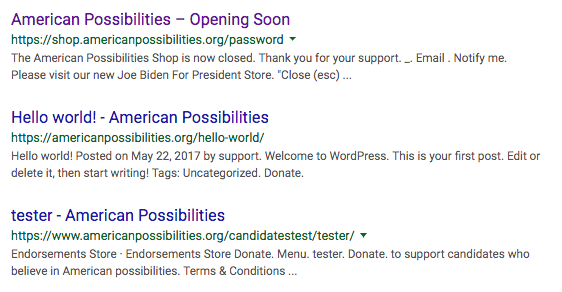 So maybe a bug in Google is causing issues with queries related to [joe biden]. And maybe the joebiden.com site just needs time to accrue new value signals to rank (which could be accelerated by 301s from americanpossibilities.org). You would think a site like that would get a ton of external links. And likely it has and will. But newspaper sites frustratingly often don’t link out to sites they reference. The CNBC article about this issue, for instance, not only doesn’t link to joebiden.com, it doesn’t even ever refer to the domain name itself, only to the “official 2020 campaign page”.

Maybe other technical issues are causing problems. The site is indexed, just not ranking for anything. It does rank for an exact match search of the home page title: 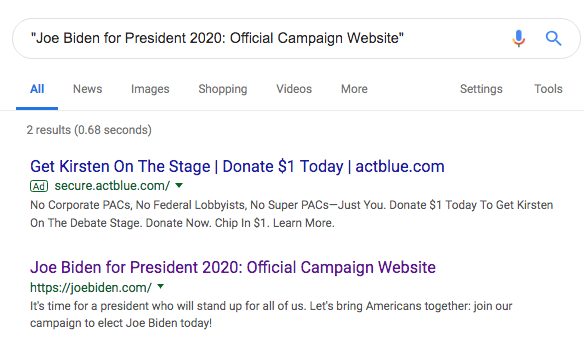 I didn’t see anything obvious beyond the lack of redirects (like a rogue canonical attribute, or block from robots.txt or a meta robots attribute). The content isn’t generated entirely via JavaScript (which can cause a delay in indexing). (It’s also possible, I suppose, a penalty exists on the site. It’s unlikely, but it certainly has happened before with political candidate web sites.)

Possibility technical issues did exist but were fixed between when the CNBC article was published and I started poking around. Majestic shows a last crawl of 4/26/19 (which would have been after the launch) and a status of “blocked domain or IP”. 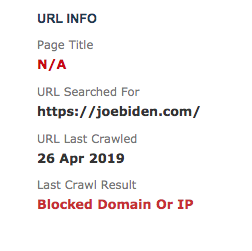 And Moz shows the domain as redirecting to americanpossibilities.org, which may be old data from when the redirect was still in place:

Or maybe something weird is still going on.

Bing is ranking the domain, although it’s ranking http://www.joebiden.com, even though that 301 redirects to https://joebiden.com. 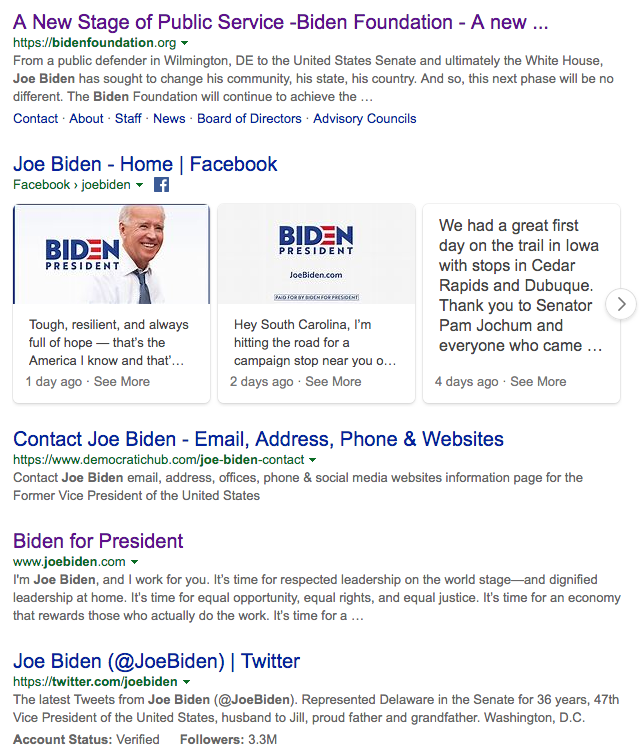 Maybe this is to be expected. New domains take time to accrue value and queries related to [joe biden] are pretty competitive. Other political candidates’ web sites rank well for queries related to their names, but most of those web sites aren’t new. For instance, Cory Booker’s site has been around since 2001!

Edit May 8,  2019: “to be expected” seems the likely answer. americanpossibilities.org no longer ranks for [joe biden] (to be expected since it now returns a 404) and joebiden.com has moved up in rankings from 51 to 13. I bet it will be ranking on the first page in no time!

Note that it took less than a month for the site to start ranking on the first page for a super competitive query both because it’s gotten tons of external links as the natural result of it being the official candidate site (so lots of other sites naturally link to it when mentioning Biden) and it is the “official” site for that query. (For sure though, this all would have happened much more quickly if americanpossibilities.org had been 301 redirected to joebiden.com and if bidenfoundation.org at least linked to it on the home page and in their suspension message.)

What can we learn from all this?

And hey, did you know that Keylime Toolbox is great for monitoring a site launch or migration? You can aggregate the original and new domain into one reporting group and track rankings, traffic, and other SEO data for the group and track if rankings or traffic drop (along with other great insights). Check out a free trial.