[2015 update: the Flickr photo in question now ranks #1 for the example query. Of course, this query isn’t very competitive, but

For the recent webinar I did on link building, I was researching how use of social networks can help with SEO. Businesses can gain all kinds of value from social networking: build brand recognition, increase customer loyalty, help them be responsive to customer issues and better understand the audience, get more links and exposure… Er, etc.

But one value that is sometimes overlooked is increased opportunity to rank. Your can leverage this for reputation management, but it can also work for any search query you want to rank for. You can capture more positions in the SERPs if in addition to having content from your site rank, you can get content from social networks that point to your content to rank.

Take, for instance, this article I wrote for Search Engine Land about Hakia’s Meet Others feature. Here’s an image, hosted on Flickr, that I used in the article:

And here’s that image at position #13 (and #14) for a Google search for Hakia Meet Others:

So, sure. Hosting the image on Flickr is great just for storage and organization. It helps me share what I’m doing with anyone who’s interested and who’s added me as a Flickr contact. I can get traffic from the link. But it’s also giving me another opportunity (in addition to the article itself, which is ranked #3 for the query) to rank. Sounds good to me.

[Additional 2015 update: The Flickr image ranks #1 and the Search Engine Land article ranks #2. And for better click through rate, I could make the image description on Flickr more compelling.] 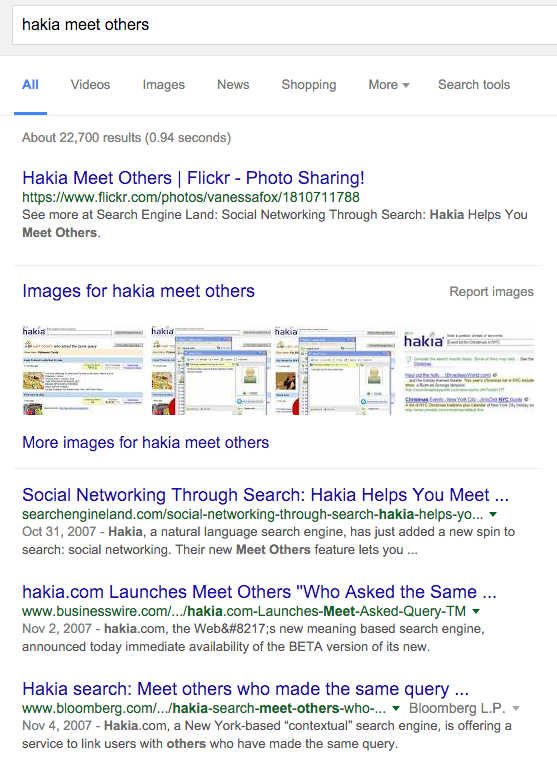 16 thoughts on “Flickr for SEO Value: A Short Example”