On January 10, 2017, Google began rolling out an algorithm that flagged and potentially lowered rankings of mobile pages that show an interstitial to visitors before showing the page content.

Our analysis finds that while many sites have seen no impact, some sites did see either lower or higher mobile rankings. However, the impact seems (in many cases) to be as of 1/18/17. (Google’s “roll out” might have taken that long.)

If your site doesn’t use mobile interstitials for the first click, it still might be impacted in a positive way if competitors lost ranking.

Google search traffic varies for all kinds of reasons (search interest, competition, Google search results layout changes, and so on), so how can you know if if your site was potentially impacted (either positively or negatively) by this change?

One key metric to look at is ranking changes for unbranded mobile queries. Of course, it’s always possible that rankings changes are coincidental to any specific Google algorithm change, but that’s the nature of organic search metrics.

I suggest filtering out branded queries for this metric because Google’s algorithm changes that lower rankings for quality of spam issues often don’t impact branded queries. One reason is that the searcher intent for the brand site is a stronger signal than the quality of the site itself in rankings algorithms.

Looking at data for unbranded queries in aggregate is a good starting point to surfacing trends.

If you do find rankings changes, you can further dig into the data by looking at categories of queries. For example, if only “how to” related queries were impacted, you might check to see if Google recently launched an answer onebox that has pushed organic listings down.

You also want to filter the data to only queries from mobile devices and to compare that data to desktop query data. If rankings changes happened for both sets of data, then they are likely unrelated to Google’s change.

Keylime Toolbox query segments use regular expressions. Every reporting group contains a “branded” segment by default and all reports can automatically be filtered by branded and unbranded queries.

When you set up a Keylime Toolbox account, edit the branded segment pattern to accurately reflect how audiences may search for your brand, including misspellings, acronyms, brand variations, and so on.

For example, if your organization is the National Park Service, the regular expression for the branded pattern might be:

This would match queries such as:

And queries such as the following would be classified as unbranded:

You can filter all reports to show data for only searches from mobile devices, and with the SEO Trends report, you can compare (ranking, CTR, impressions, and traffic) trends for mobile vs. desktop search.

To view ranking trends and compare by device, go to the SEO Trends report. Click the Configure Report link and choose: 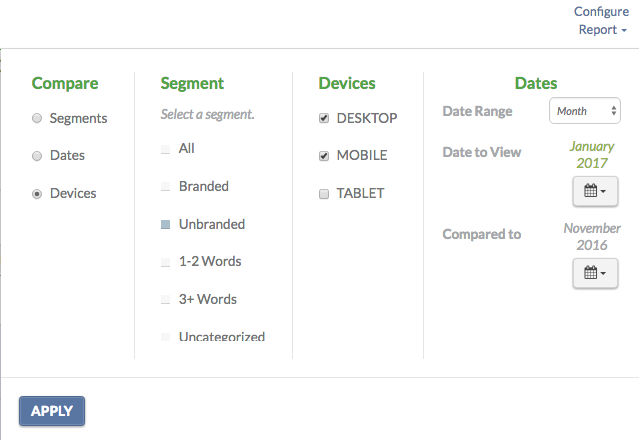 In the example below, you can see that unbranded desktop query rankings are more volatile than their mobile counterparts, but mobile rankings seem to have declined beginning 1/18/17. It’s definitely worth watching to see how the trends continue. Mobile rankings are important to this site mobile searchers send more traffic to the site than desktop searchers.

Below is an example site that showed an improvement in mobile rankings beginning 1/18/17: 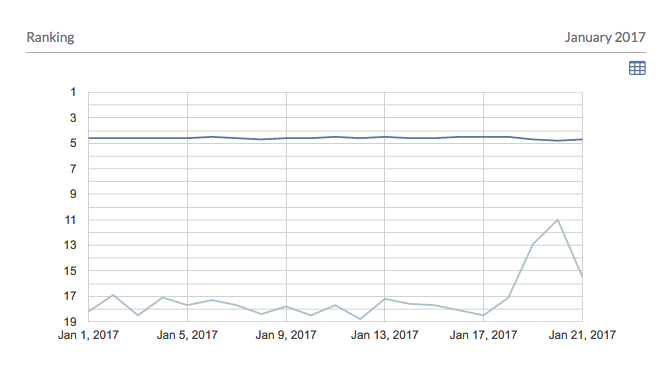 You can do that by clicking Configure Report and then choosing a custom date range. You might want to compare the data to the same range the previous week, month, or year. In this case, the reporting group doesn’t have historical data for a year (Keylime Toolbox initially imports the previous 90 days of data then stores data going forward) and the data from the previous month might be anomalous since it was during a holiday season, so we can look at the previous week. 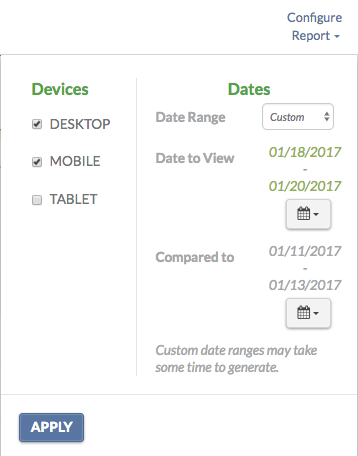 You can chart this on a graph via the SEO Trends report as well (in this example the report is configured to compare dates and filter to mobile unbranded traffic): 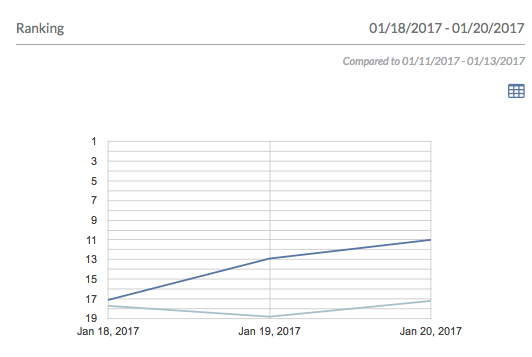 You can further dig into the data. For example:

From the Search Analytics report:

As noted earlier, with Google Search Console, you can only view a limited number of queries in the user interface (often 999 but sometimes up to 2,000), but you can view ranking differences between dates directly in the report. (Keylime Toolbox provides significantly more queries, so advanced analysis such as comparing rankings for all keywords between two periods of time is done via exporting the data to Excel.)

Don’t see any rankings change? If your site presents mobile interstitials to Google searchers, you should still look at ways to minimize them. Google’s algorithms are always based on numerous factors, and adjust often, so there’s no guarantee this ranking factor won’t impact the site in the future.

See rankings improvements? Great! Your site’s pages may have an edge of the competition regarding mobile user experience. Keep this data for reference in case anyone tries to introduce mobile interstitials to the site later.

Don’t have Keylime Toolbox? Check out a free trial!