Google organic search traffic is pretty important for most sites, but it doesn’t exist in a vacuum. It’s useful to understand the context of other traffic sources to a site.

It’s also valuable to better understand what your customers are looking for. One core feature of Keylime Toolbox is recovery of “not provided” query data and that enables Keylime to provide key insights such as:

Traffic Sources At a Glance

Below is an example of the top section of the dashboard that shows where traffic is coming from.

Everything in this top section comes from Google Analytics,  but one advantage to viewing it in Keylime Toolbox is that you get all the key information you need in one easy dashboard. There’s no need to toggle back and forth and generate various reports. It’s all there automatically. You can choose any date range you’d like and compare it to any other date range.

Another advantage to this view over Google Analytics directly is that we’ve customized the paid, social, and email reports. In Google Analytics, channel attribution can be skewed due to issues such as incomplete or inaccurate tagging. Also, for the Social reports in Google Analytics in particular, many sites that aren’t necessarily social networks (like Blogger and WordPress) are included in this report.

We’ve specified a very particular list of sources to be allocated to each channel so provide a more reliable view.

One of the many ways this display is useful is when troubleshooting traffic declines. For instance, in the example below, Google organic traffic is down (when comparing the current week to the same week last month) and the company was worried the site had been hit by a Google penalty and lost ranking. But by just opening the Keylime dashboard, they can see that a penalty is unlikely. Traffic is down across most channels and across all search engines. (In fact, Google organic is down the least!) The first two areas to investigate should be seasonality and potential technical issues, not possible Google penalties.

With Keylime Toolbox, this company can investigate both possibilities. First, they can click to the SEO Trends report to see how traffic, ranking, impressions, and CTR are trending over time. In this case, we can see similar patterns in the traffic and impressions graph, indicating seasonality declines. 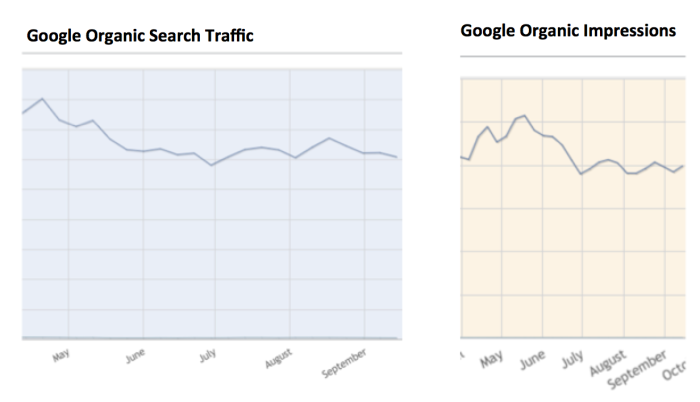 If they have subscribed to the Crawl Analytics reports in Keylime Toolbox (available as part of the enterprise version or as a separate add on), they can easily see if search engines are having trouble crawling any sections of the site (which could mean both that indexing is impacted and that visitors to the site are also having trouble accessing the site).

Here’s an example of what that might look like (Google  webmaster tools also provides detail about crawl errors, but not the context of what percentage of the crawl those errors comprise):

“Not Provided” Query Recovery: What Are Audiences Searching For?

One of the core features of Keylime Toolbox is recovery of as much “not provided” query data as possible.  (The amount Keylime Toolbox can recover varies based on lots of factors and is different for each site.)

By paring that recovered data with total traffic numbers, Keylime can estimate the distribution of Google organic traffic. How much is branded vs. non-branded? What topic areas bring in the most traffic.

The Keylime Dashboard surfaces this data at a glance.

How Much Google Organic Traffic is From Branded Searches?

Below are two examples sites with different branded vs. unbranded distribution. Too much branded traffic and the site may not be visible for key topics. Too little branded traffic may signify a lack of brand awareness or positive engagement with the brand.

What Topic Areas Drive The Most Google Organic Traffic?

Using query segmentation, Keylime Toolbox can surface what topics are bringing in the most visitors (and averaged metrics such as ranking, click through rate, and bounce rate for each topic area).

From this, you can dive into more details via the SEO Metrics report:

Keylime Toolbox grabs the top five queries that bring Google organic traffic to the site and show rankings over time (as reported by Google).

Get Started Now With A Free Trial!

Sign up now for your free trial and check out the dashboard for yourself.

If you’d like to include log analysis or are an agency managing lots of sites, contact us for details of what we have to offer and discounted pricing that’s available.

Below is a tiny view of what the entire dashboard looks like: 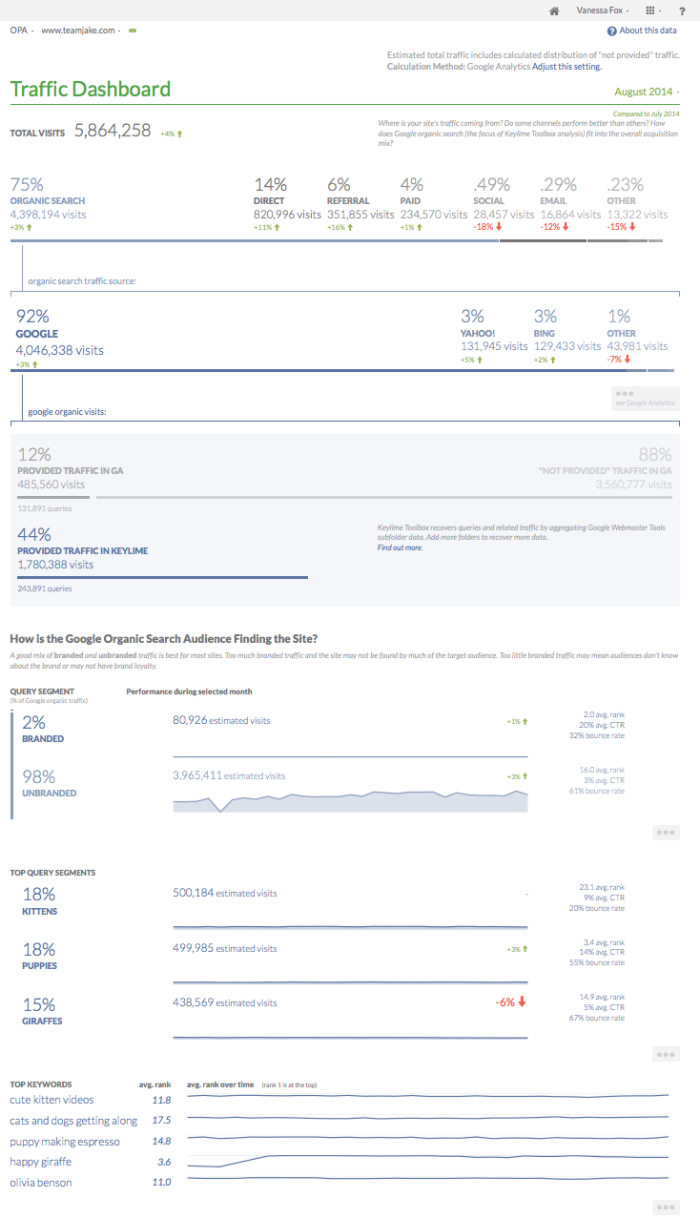